Laughter is always the Best Medicine

The Comic's Lounge in North Melbourne has become the unofficial home of the best comedy our city has to offer year round. Both local and international acts of the highest quality grace the stage every week making this the place to get a serious dose of the best medicine.

Walking in you're instantly met with a nostalgic sense of all the comedy that has passed through the walls of this now iconic Melbourne venue. Pictures of recognisable comics, both past and present, surround you in the front bar, securing the knowledge that this place has earnt it's stripes. Leopard print couches greeting you on arrival go so far to suggest that even the furnishings have a sense of humour, not to mention the affable bar staff who are up for a laugh pre-show. Refreshingly, however, there are no strained attempts by the house, or pressure on you, to start you laughing until showtime.

Different to some styles of comedy venues, the Comic's Lounge opts for a more subtle approach, "We can't really have comedians being your waiters or bar staff", explains Grantlee O'Sullivan, the General Manager, "Purely because it's too much funny. By the time you get half way through the show you'd be exhausted." Instead they like to leave it to the pros to get you in hysterics. It's smart decisions like these that have seen the Comic's Lounge grow from humble beginnings into Melbourne's only 6 nights a week comedy venue.

Tony O'Sullivan (Grantlee's father) bought the Star and Garter pub in 1998 (previously owned by Jimoen and Bob Franklin) with a hugely popular Thursday night comedy set. From the success of that Tony decided to introduce Friday and Saturday night comedy at a time when it simply wasn't done. After a while the neighbours made repeated noise complaints (in South Melbourne, who would have thought!?) that forced them from the pub and the family was looking for a new venue to pursue the comedy goal.

They found it in Errol St and have managed to solidify their position as the place to go for guaranteed good stand up. "Only experienced comedians will get on our stage for the pro shows. We need everyone on the bill to be as good as each other and the headline will stand out," asserts O'Sullivan. But this isn't to say that the comic's lounge actively doesn't help out budding comedians hone their craft in front of an audience, Tuesday night is amateur night which also offers people a chance to catch a cheap show which might just uncover the next superstar. "When people book for Tuesday nights we tell them 'If they're good they're gonna be really good, but if they're bad they're even funnier.' And also Hughesy'll come down and do a jump up spot or Glenn Robbins, the pros'll still come along and try their new material."

The night [HPSS] visited the Comic's Lounge we had the pleasure of catching Canadian Ian Bagg and asked him as an international performer, what set the Comic's Lounge apart from other venues; "It's kind of got this old school feel to it, like it could be in the movie Snatch, it's just different and it's fun. The crowds that come here are to have fun, the colours of the place are to have fun and the lights are to have fun and it's just kind of, it's fun." Confirming the idea that indeed, it's a fun place to be.

On top of the great shows there's a dinner menu available from 7pm, which has everything from your classic parma to veggie pie, or if that's not what you're after you can order simple snacks to share.

Maybe what this quirky comedy venue offers best is a chance to get out of the house and into an environment that absolutely anybody can enjoy. As Bagg describes it, "The personality that is here is every facet of Melbourne, 'I'm a hipster, and that persons a parent and the next persons a rocker' and it doesn't make sense, but then when they sit down and start watching the show it melds into one personality."

The Comic's Lounge isn't out to change the face of comedy, they just want to "Take people away from their lives, entertain them, put them in a cab and send them home". O'Sullivan aims might sound abrupt, however his approach is indisputably genuine. And if he gets his way and turns more of Melbourne to the world of stand up comedy, who knows, he might just put a few doctors out of a job.

Want to visit the Comics Lounge? 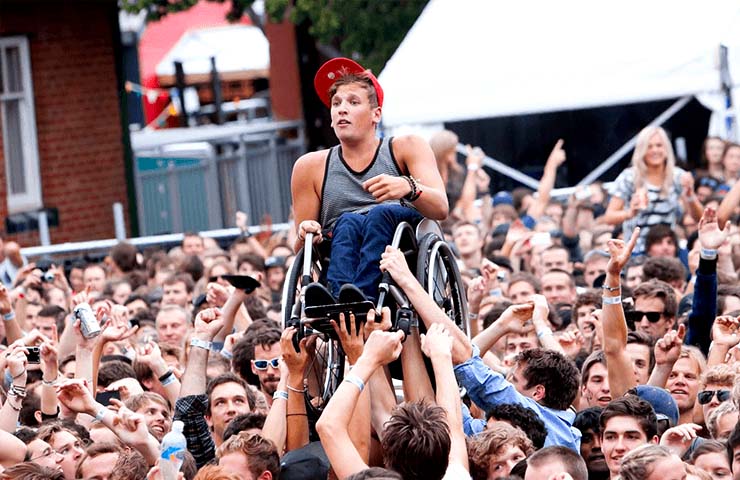